Is anyone really winning this war? 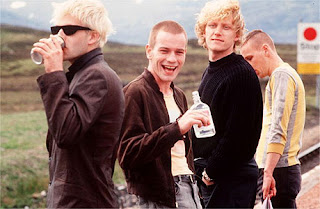 I chose this picture, to show that nobody is really winning the war on drugs.

People like Mark Renton in Trainspotting continues to struggle with their addiction, the police and bad quality drugs on the streets, despite of the efforts of SOCA to win the war on drugs.

We're winning the war against the cocaine industry, police declare

Figures compiled by the Serious Organised Crime Agency (Soca) and the Forensic Science Service, show that the average purity levels of cocaine seized by the police has dropped from 33 per cent, in 2007-08 to 26 per cent in 2008-09 and that a third of seizures now consist of as little as 9 per cent cocaine

Martin Barnes, the chief executive of Drugscope, said: "To suggest the world cocaine market is 'in retreat' is probably premature. The street price and purity of cocaine have been falling for some time – cocaine has become more affordable and has lost much of its image as a drug exclusively for rich celebrities.

"So far, the reported disruptions in supply have not fed through to an increase in the street price, largely because dealers are trying to maintain the price and maximise profits, by selling a product that is much less pure."

The lowering of the purity of cocaine is regarded by Soca as a victory because it proves that dealers are struggling to import the drug, and so are forced to use less of their supply of much purer cocaine – latest figures show that cocaine is generally around 66 per cent pure before it hits the UK streets.

But Danny Kushlick, of the drugs policy foundation Transform, says this presents two problems. He said: "There is a health issue because it means people do not know what they are taking. And while Soca claims the lowering of purity will put people off, we say the opposite. If you cut the strength of a drug, people will simply take more of it."